In September, I met Bill Hannabach and Steve Daly at the Natural Products Expo in Baltimore.  They are the creators of MassOMEGA, New England’s Wild Fish Oil. 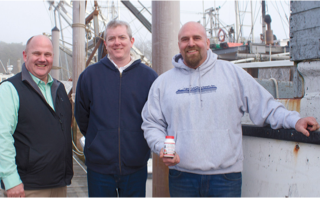 To be honest, I was curious to learn what made their fish oil so special.  Isn’t fish oil, just fish oil?

Well, apparently not.  And what I found even more interesting is why they entered into this business in the first place.  According to ConsumerLab.com, fish oil was the leading natural product supplement used by adults until this year when Vitamin D eked past them in popularity.

This is not the case of a couple guys jumping into the lucrative supplement business.  Quite the contrary.  Hannabach and Daly, both family men living in New England, are concerned about the local New England fishing communities.

In 2014, Hannabach and Daly started exploring ways to help local fishermen increase the utilization of their catch. They created D&H Labs and began exploring the by-products of various New England fish species that are sustainably managed and harvested.

Lo and behold, through self-funded research and development they identified that the purified liver oil from the winter skate contains 30% more total omega 3 fatty acids than natural cod liver and salmon fish oil. Keeping the oil in its natural triglyceride form provides health minded consumers with a complete omega 3, 6, 7 and 9 dietary supplement. Few other fish oils are this comprehensive.

Fishermen used to fillet the skate at sea and throw the rest of the body overboard. Now, they harvest the livers for D&H Labs. The livers are then taken to a manufacturing facility in Maine. D&H Labs established the harvest method, supply chain, manufacturing processes and production facilities to make MassOMEGA, New England’s Wild Fish Oil a reality.

“By selling those livers to D&H Labs, fisherman increase their revenue without placing further stress on the fishery,” explained Daly. This is good for the health minded consumer, the environment and the fishermen.

In March 2017, MassOMEGA was launched on the town docks of the Chatham fishing pier, on Cape Cod. The winter skate is sustainably harvested from Maine to New Jersey. Fleets of small boats, with a captain and first mate venture out and catch skate in small batches. 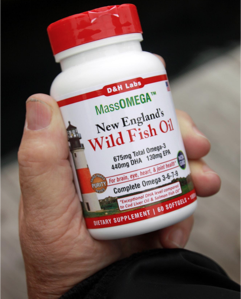 “Well no, we promote buy local, buy natural and buy American, especially when it is a superior quality fish oil. If people care about the source of their fish oil, we can trace the fish back to the boat,” said Hannabach.

MassOMEGA achieves the highest 5-star certification rating for quality, purity and potency through the International Fish Oil Standards program for testing and certification of fish oils.

Over 50% of the fish oil consumed in the US is imported from places like South America, using forage species such as anchovy and sardines.